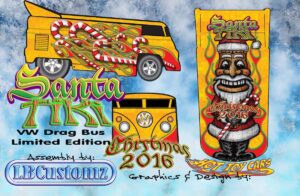 We had to be a little “different” …not just a traditional santa or candy canes here!!  Nope, some may think of snow, but, we had something a little warmer in mind…lol  Whats more “tropical” than a “tiki”?  I dont know, but that is what inspired KB to combine the elements of the Traditional Jolly Ole Saint Nick and a weathered wooden tiki you might see on some tropical island! 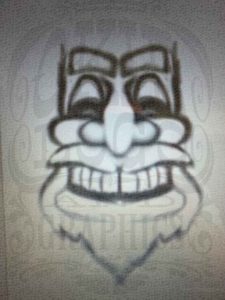 This is a unique design only found on this exclusive edition.
And again, this is a NEW..HAND DRAWN artwork character!  You wont find this floating around the net or used on someone else’s Christmas dairy from 2, 10 or 20 years ago!
Yep,  KB sketched the concept out by hand and then used multiple photoshop layers and textures painstakingly tweeked and refined to create the Santa Tiki character who appears to be previously brightly painted but has had to endure many years of the elements, (that darned old “open sleigh” no doubt! lol) and is now slightly dingy, off white and faded red, with ever widening woodgrain cracks through out his Candy Cane holding jolly self!! 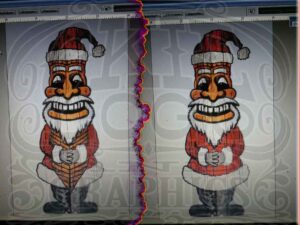 Then as only a true automotive enthusiast would have it..Santa Tiki just HAD to have some FLAMES!!  But, these flames have a Christmas flair with red and green colors to match the season.

Oh and speaking of flames and candy canes….lol
When have you ever seen those two things together??  Not often I venture!  KB had that stuck in his head from the inception of this design and figured a way to pull it off without being just some red and white stripes over flame shapes!  33 seperate layers of flames and scratch created candy canes were intertwined to get just the right look and balance for the sides!!  And this design for the side of the Drag Bus, got a few extra flames and candy canes too!!!

Dino also adds his masterful details to the lights and grill.
AAAAND….
Seals it up with generously applied 2 part Urethane Automotive Clear!!
Each has is numbered on rear.  PLUS>>>>